A brief History of the Cuckoo Clock

A cuckoo clock is a mechanical clock, typically weigh powered and pendulum driven, that strikes the hours using small bellows and whistles that imitate the call of the Common Cuckoo in addition to striking a wire gong. The whistle pipe and bellows mechanism used to produce the cuckoo call was installed in almost every kind of cuckoo clock since the middle of the eighteenth century and has remained almost without variation until the present.

The design of a Black Forest cuckoo clock is now conventional. Most are made in the shape of a rustic birdhouse or chalet to hang on a wall. The wooden case is frequently decorated with carved leaves and animal heads. Most now have an automaton of the bird that appears through a small trap door while the clock is striking. 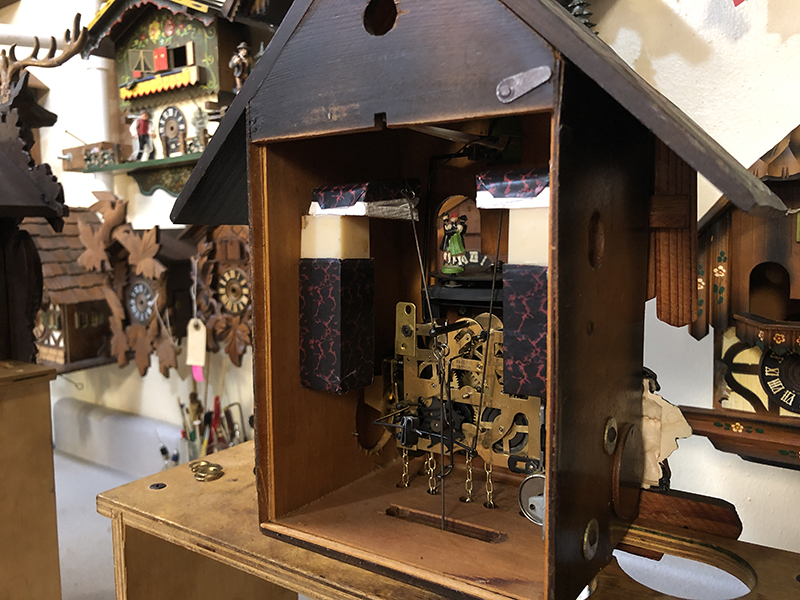 In recent years, quartz battery-powered cuckoo clocks have been available. These do not have genuine cuckoo bellows. The cuckoo bird flaps its wings as it calls to the sound of running water in the background. The call is an actual recording of a cuckoo in the wild. During the cuckoo call the double doors open and the cuckoo emerges only at full hour, and they do not have a gong wire. One thing that is unique about the quartz cuckoos is that it has a light sensor, so when you turn your lights off at night, it automatically turns off the cuckoo call. The weights are conventionally cast in the shape of pine cones made of plastic, as well as the cuckoo bird and hands. The pendulum bob is often another carved leaf. The dial is small, and typically marked with Roman numerals. 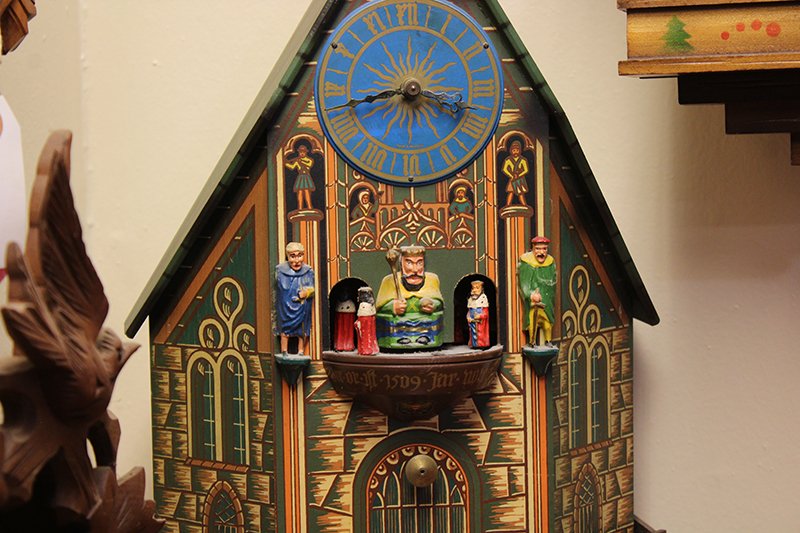 Sound is said to have been invented by Franz Ketterer in 1730 or 1738. As this sound was easier to manufacture than whistles or rooster crows, the idea spread quickly through the clockmaking industry. However, other sources say the origin story is a legend, as Ketterer real history is, the Black Forest is the tradition home of cuckoo clocks, and is still the area in which to purchase a “real” traditional cuckoo clock. Image from Deutsches-uhrenmuseum.

In 1629 an Augsburg nobleman by the name of Philipp Hainhofer (1578-1647) penned the first known description of a cuckoo clock. The clock belonged to Prince Elector August von Sachsen.

In a widely known handbook on music Musurgia Universalis (1650), the scholar Athanasius Kircher describes a mechanical organ with several automated figures, including a mechanical cuckoo. The bird automatically opens its beak and moves both its wings and tail. Simultaneously, we hear the call of the cuckoo, created by two organ pipes, tuned to a minor or major third.

In 1669 Domenico Martinelli, in his Handbook on elementary clocks Horologi Elementari (1669), suggests using the call of the cuckoo to indicate the hours. Starting at that time the mechanism of the cuckoo clock was known. Any mechanic or clockmaker, who could read Latin or Italian, knew after reading the books that it was quite doable to have the cuckoo announce the hours.

The first cuckoo clocks made in the Black Forest

There are two main fables from the eighteenth and nineteenth centuries which tell conflicting stories about the origin of the German cuckoo clock:

The first is from Father Franz Steyrer, written in 1796. He describes a meeting between two clock traders from Furtwangen (Black Forest) who met a travelling Bohemian trader who sold wooden cuckoo clocks. Both the Furtwangen traders were so excited that they bought one. On bringing it home they copied it and showed their imitation to other Black Forest clock traders. Its popularity grew in the region and more and more clockmakers started producing them. The second story is related by another priest, Markus Fidelis Jäck, in a passage from his report "Darstellungen aus der Industrie und des Verkehrs aus dem Schwarzwald" ("Description of Industry and Commerce of the Black Forest"), 1810: "The cuckoo clock was invented by a clock-master from Schönwald [Black Forest]. This craftsman adorned a clock with a moving bird that announced the hour with the cuckoo-call. The clock-master got the idea of how to make the cuckoo-call from the bellows of a church organ". As time went on, the second version became the more popular, and is the one generally related today.

Early cuckoo clock, Black Forest, 1760-1780 (Deutsches Uhrenmuseum, Inv. 03-2002)R. Dorer pointed out, in 1948, that Franz Anton Ketterer (1734 - 1806) could not have been the inventor of the cuckoo clock in 1730 because he hadn't then been born. Gerd Bender in "Die Uhrenmacher des hohen Schwarzwaldes und ihre Werke" wrote that the cuckoo clock was not native to the Black Forest. Schaaf in "Schwarzwalduhren", provides his own research which leads to the earliest cuckoos being in the "Franken-Niederbayern" area (East of Germany), in the direction of Bohemia (a region of the Czech Republic), which he notes, lends credence to the Steyrer version.

Although the idea of placing a cuckoo bird in a clock did not originate in the Black Forest, it is necessary to emphasize that the cuckoo clock as we know it today, comes from this region located in southwest Germany whose tradition of clockmaking started in the late seventeenth century. The Black Forest people who created the cuckoo clock industry developed it, and still come up with new designs and technical improvements which have made the musical cuckoo clock a valued work of art all over the world. The cuckoo clock history is linked to the Black Forest.

At the beginning of the 19th century the now traditional Black Forest clock design, the "Schilduhr" (shield clock), which had a painted flat square wooden face, behind which all the clockwork was attached. On top of the square was usually a semicircle of highly decorated wood which contained the door for the cuckoo. There was no cabinet surrounding the clockwork in this model. This model was the most prevalent model for the first half of the nineteenth century.

In the middle of the nineteenth century, there were also cuckoo mechanisms combined with the "Rahmenuhr" (framed-clock). As the name suggests, this clock consisted of a picture frame, usually with a typical Black Forest scene painted on a wooden background or a lithograph. The cuckoo was usually included in the scene, and would pop out in 3D, as usual, to announce thehour.

1850 – The Bahnhaeusle clock, a design of the century from Furtwangen

Railway-house clock by Friedrich Eisenlohr, 1850-1851; right: Kreuzer, Glatz & Co., Furtwangen, 1853-1854 (Deutsches Uhrenmuseum, Inv. 2003-081) In 1850 the first director auf the grandducal clockmaker school at Furtwangen Robert Gerwig launched a public competition to submit designs for modern clockcases, which would allow homemade products to attain a professional appearance. Friedrich Eisenlohr, who as an architect had been responsible for creating the buildings along the then new and first railroad line, submitted the most far-reaching design. Eisenlohr enhanced the facade of a standard railroad-guard’s residence, as he had built many of them, with a clock dial. This wall clock became the prototype of today’s popular Souvenir cuckoo clocks.

By 1860, the Bahnhaeusle style had started to develop away from its original, “severe” graphic form, and evolve toward the well-known case with three-dimensional woodcarvings. 1862 Johann Baptist Beha started to enhance his richly decorated Bahnhaeusle clocks with hands carved from bone, and weights cast in the shape of pine cones. Even today this combination of elements is characteristic for cuckoo clocks. The chalet style originated at the end of nineteenth century. There are currently three different basic styles: Black Forest chalet, Swiss chalet (with two types the "Brienz" and the "Emmenthal") and finally the Bavarian chalet.

The basic cuckoo clock of today is the railway-house (Bahnhäusle) form, still with its rich ornamentation, and these are known under the name of "traditional". The richly decorated Bahnhaeusle clocks have become a symbol of the Black Forest that is instantly understood anywhere in the world.

The centre of production continues to be the Black Forest region of Germany, in the area of Triberg im Schwarzwald and Neustadt, where there are several dozen firms making the whole clock or parts of it. The Chalet cuckoo clock is often wrongly associated with Switzerland, as in the movie The Third Man. In the USA, this error is probably due to a story by Mark Twain in which the hero depicts the Swiss town of Lucerne as the home of cuckoo clocks.