We are located in Moscow, Tennessee USA about 30 miles East of Memphis. My granddaughters call me Papa. My Clock shop specializes in cuckoo clock repair and has been doing so since 1999. I take in and repair cuckoo clocks from all over the United States by mail from folks who can’t find anyone near them to repair them at all or find someone who can repair them competently and correctly!

I also answer questions people have about cuckoo clocks from all over the World at no charge and enjoy doing so! To read all about the expert cuckoo clock repair and restoration I offer here at my shop please click on our Home Page! 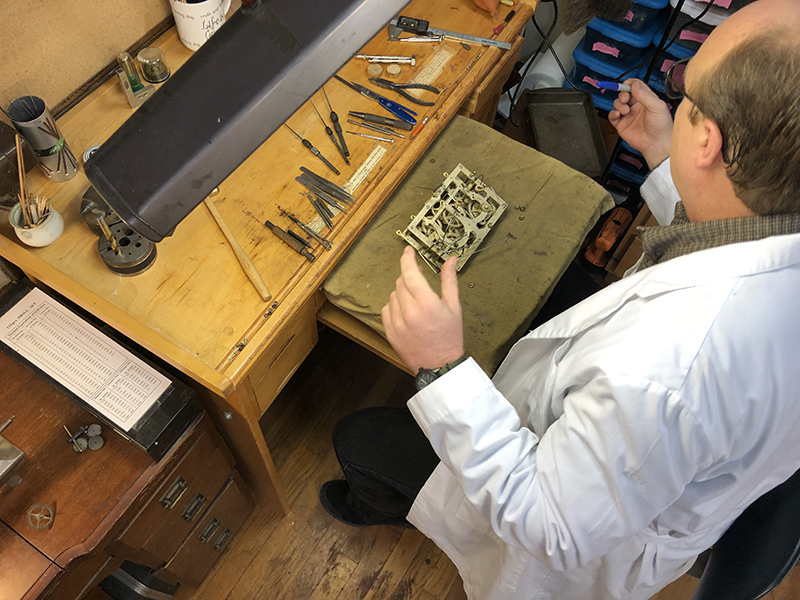 I am a certified “cuckoo” clockmaker, certified horologist as well as a watchmaker. Some of my fondest memories from childhood revolve around watches and clocks. As soon as I started wearing wrist watches (the wind up kind back in the dark ages), when they would slow down we sent them to “Uncle Doc” who was a watchmaker in Texas. I would watch the mail and pretty soon my watch would arrive all shiny and running on time. Uncle Doc would put a note in the envelope with an amount just for parts, and I would gather up my lawn mowing money and send it to him. I grew up watching my other family members do the same. I was amazed that someone could actually make them work, and thus began a quest for how time pieces worked and eventually how to repair them and keep them working.

In my early teens, my brother-in-law was the pastor of a local church. He had a prominent member who collected and repaired clocks. Pretty soon clocks started becoming part of my life. I remember when I was about 12 my mother received an 1880’s Seth Thomas 30 hour clock for an anniversary present. I watched her wind that clock everyday up until I left home to be married. It was always a pleasure to see how much enjoyment she got out of that clock and her daily ritual of winding it. Here it is 33 years later and that clock had never stopped. Earlier this year I had the privilege of a lifetime. I overhauled her clock for her and now she is again winding that clock everyday.

All my family has clocks and one of my brothers has quite a varied collection. It has been my privilege to keep his clocks running. Every time I’m home I wind his clocks and set the ones that have run down.

I work on all kinds of mechanical clocks but have specialized in cuckoos and only do regular clocks and quartz watch overhauls for family, friends, and members of my church. And I admit I sometimes take in clocks from their friends and total strangers who see the “Cuckoo Clock Doctor” signs on my Jeep and flag me down.

My passion is cuckoo clocks. I’ve heard some same you have to be crazy to work on clocks and cuckoo to work on cuckoos! You better send the white coats after me because I’m certifiably crazy about working on your cuckoo clocks.